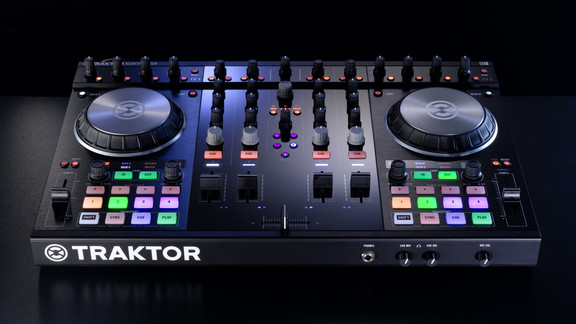 Both all-in-one DJ systems now offer an improved look and feel with added control over the latest TRAKTOR PRO 2 features. Furthermore, both the S4 and S2 are now plug-and-play with TRAKTOR DJ – the world’s most successful DJ app for iPad and iPhone.

Trusted by countless professional DJs for unparalleled creative possibilities and supreme work flow, the sharply redesigned TRAKTOR KONTROL S4 and S2 now feature color-coded RGB buttons that trigger and identify loops, cue points, and samples for improved visual feedback. Also upgraded are the high resolution jog-wheels, which now feature aircraft-grade aluminum plates for increased durability and performance. The advanced Flux Mode feature is now instantly accessible on the S4 and S2 via dedicated buttons on each deck, and TRAKTOR PRO 2’s Remix Deck controls can now be accessed directly from the units. TRAKTOR KONTROL S4 introduces a new separate booth output on the main out section of the rear panel which can be switched between Main or Booth, allowing for separate booth output volume – essential for many pro DJs.

In addition to offering all core TRAKTOR PRO 2 controls, the KONTROL S4 and S2 are now plug-and-play with TRAKTOR DJ – even more closely uniting hard and software. Both units deliver physical control for every function including cue points and Freeze Mode. Boasting a compact size, robust build, and innate TRAKTOR DJ integration, TRAKTOR KONTROL S2 is the ideal choice for iOS-based DJ setups.