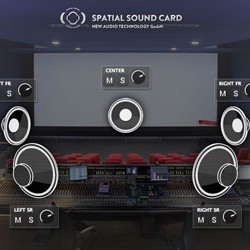 New Audio Technology has announced the release of Spatial Sound Card (SSC), a set of virtual speakers for stereo and surround monitoring for the computer with standard headphones.

The Spatial Sound Card is a virtual sound card that is inserted between software, operating system and audio hardware and enables monitoring of stereo and surround up to 7.1 with a standard headphone on the computer. The room visualizations originate from a constantly growing number of high end studios and dub stages like the ARRI Stage One, MSM Munich and others. The technology used in the SSC was used on major Blu-Ray releases (e.g. The Expendables I and II).

To optimize the virtualization the SSC provides parameters to customize the frequency curve of the used headphones. Presets for well-known headphone models are included.

The Spatial Sound Card works with all applications that support multichannel audio output. These include media players like VLC and FLAC-Player as well as video and audio workstations. The SSC is recommended for media professionals from the audio, video or games area as well as for agencies and companies with workstations that need high quality audio monitoring.