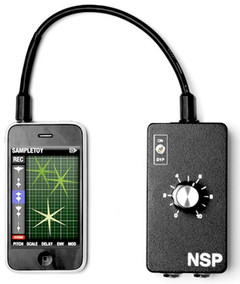 New Signal Process has announced the release of the NSP BreakOut, a handmade, highly functional, professional audio interface for the iPad, and iPhone that connects through the headphone jack.

Now you can play through all the weird new digital app-sounds, from Japanese touch-screen noise synths and T-Pain to cool 8-bit distortions, and send them into your signal chain or Marshall.

The musicians, artists, hacks and tech gurus at New Signal Process have invented an audio recording and performance interface for the iPhone and iPad called the BreakOut, that literally breaks out the next myriad ramble of sonic/artistic possibilities.

Their hardware allows you to plug in a professional grade microphone, keyboard or guitar through your iPad or iPhone and send it out analog to an amp, di, or computer.

The same size as the iPhone, the BreakOut is housed in a rugged die-cast aluminum case and made with hifi components, a true bypass and level controls.

The NSP BreakOut pedal is available from New Signal Process for $115 USD.