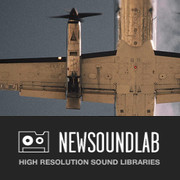 This library features descending aircraft flyovers at Los Angeles International Airport. One unique aspect of LAX is that it’s nestled in the city, making it easy to stand directly under very low flying airplanes to capture a great sound.

Two different microphone positions were used: One facing the oncoming aircraft, and the other pointing in the opposite direction to capture the flyover and further decent as the aircraft lands.

Sounds were captured with a Sanken CSS-5 Stereo Shotgun mic in 120 degree stereo mode. The microphone was mounted in a full Rycote windshield kit and connected to a Sound Devices 702 recorder.

All sounds in this release are in 24bit 96khz Broadcast Wave format. Files are in a zip file, which includes a PDF with metadata. Upon purchase, you will receive an email with a link to instantly download the library.

NSL002 LAX Aircraft is available to purchase for $25 USD.