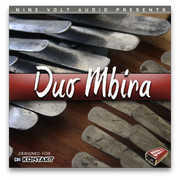 Nine Volt Audio has announced the release of Duo – Mbira for Native Instruments Kontakt 3 or higher.

With origins dating to the 1500s, the mbira’s combination of driving melody, rhythm and percussive “zing” has deep spiritual and cultural roots to areas of Africa. Sometimes referred to as a “finger xylophone”, mbiras are equipped with hand-forged iron “keys” attached to a wooden sounding board, specially chosen for their resonate qualities. Keys are plucked with the thumbs and an index finger.

At first glance the mbira resembles a kalimba, but unlike the uniform keys found on a kalimba, the mbira uses keys of varying widths, weight and thickness to create tones richer in upper harmonics and low overtones.

As part of Nine Volt Audio’s Duo line of products, we’ve recorded TWO mbiras. The larger mbira dzavadzimu originates from Zimbabwe and has 23 keys with its lowest note measuring over 7” long. The nyunga nyunga is a smaller 14 key mbira with traditional buzzers (which can be turned on or off). Having two different sampled instruments allows composers to create the signature interlocking musical relationships found in mbira music and can make one feel as if they are sitting between two players.

With over 3000 samples and patches that range from natural and earthy to reinforced and modern, Duo puts the intimate sound of the mbria at your fingertips.