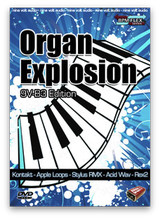 Featuring the sounds of the Hammond® B-3, Organ Explosion presents 20 tightly organized song suites covering funk, blues, jazz, rock and more. With rhythmic bursts, bubbling riffs and fat back grooves, the 700+ loop collection is a go-to source for raw, infectious and emotive playing.

The Organ Explosion library takes a new an inventive approach by placing left and right hand performances into separate loops. While the left hand lays down solid basslines and the right pumps rhythm and melodies, composers have the freedom to combine loops for complete performances and the flexibility to separate them, opening up additional creative and compositional options.

And as part of the BPM Flex Series™, every REX-based loop (used in Stylus RMX and Kontakt) can be used at a huge range of tempos with no artificial stretching. Need to slow some fiery 140 BPM grooves to a 90 BPM swinging blues? No problem!

Organ Explosion is available on DVD or as a download for $99.99 USD.