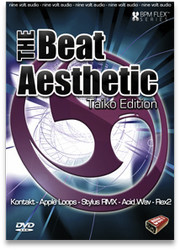 The Beat Aesthetic: Taiko Edition transforms the thunder of traditional Japanese drums into a giant fist of fat grooves. With a percussion ensemble performing like the singular mind of a great drummer, the sound is wide and kicking with big backbeats and gripping rhythms.

Through the use of over 30 different instruments, ranging from the low frequency impacts of the 500 pound odaiko to the tight and high snare-like sound of the shime daikos, the collection’s twenty suites of beats, fills, builds and hits remain sonically diverse and engaging.

Stylus RMX and Kontakt users will enjoy a layout that enables easy improvisation of entire percussion tracks. And as part of the BPM Flex Series, grooves can be used at extremely wide ranges of tempo while retaining a natural sound. Additionally, Stylus RMX users will experience a new and never before seen feature: multi-track loops and MIDI files triggered from a single channel!

With loops that float between tribal, cinematic, rock and world beat feels, this volume of the Beat Aesthetic continues the legacy of mixing imaginative playing with top-notch sounds, tempo flexibility with tight organization, and originality with ease-of-use.

The Beat Aesthetic is available to purchase for $109.99 USD.