No Dough Samples has announced the release of Daniel Solar – House, Disco ‘n Deep, the first in a new Artist Series sample packs. 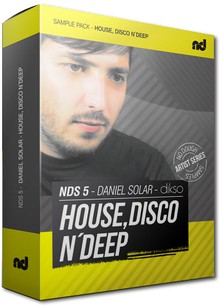 NDS-5 sees the launch of an exciting new range of samples from No Dough, as the first in our ARTIST SERIES of packs, We bring you some of the hottest current producers, Daniels pack not only represents his sound which walks the well worn paths between House music and Disco but also gives you an indispencable toolkit and something that acts as a real go to collection for all sorts of music. This is a truely unmissable pack and a collection that represents one of the sounds thats rocking the underground right now.

Daniels sound is the sound of the underground clubs in the UK and Berlin, fusing House with Disco and everything inbetween with a classy, refined and punchy sound. He is also the head honcho of DIKSO records out of Berlin, who you can often find topping the vinyl charts worldwide and are a staple in the box of any DJ who knows his stuff.

As a collection NDS-5 is much more than just your average Artist Pack which we often found could be smaller and limited in scope. Not this pack, this is a full on collection featuring hundreds of loops and single shots. These sounds are as inspirational in terms of there music as they are expertly produced in terms of there sound. All hand crafted by Daniel in his Berlin studio using the latest cutting edge digital production techniques and some highly sought after analogue equipment. Sourced from his personal collection of instruments and exotic sound sources. When we do a loop pack we also insist on usablity, so you will not find any loops needlessly drenched in reverb and other effects just to make them sound good, this stuff is ready to fit into your project and sounds good on a fundamental level – they are the real deal.

Get the sound of Dikso records, Daniel Solar and that currently buzzing vinyl house and disco scene, this is the sound of what is hot right now, and thats why we wanted to get this pack done and brought out as soon as possible. This is a collection of drum shots and loops that will bring you inspiration and bring your current project to life with the vibe thats rooted in great sounding vintage house, disco but with a thoroughly modern take on the music.

As usual where relevant we have included samplers files so you can find what you want quickly and get straight to work. It’s about making music afterall not searching through your hard drive.