Noisebud has announced the release of Fletchy-Muncher, a free effect plug-in for Windows designed to spot harsh mixes. 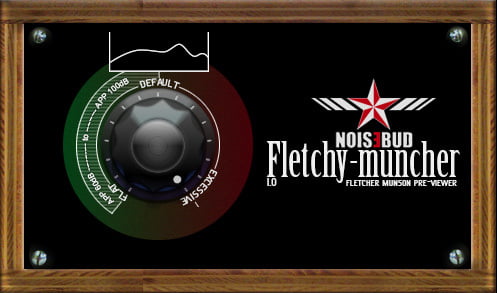 Fletcher and Munson measured the human ears frequency response on different levels and created an average curve from a test with many subjects. They concluded, roughly speaking, that the mid range is more prominent at lower levels and the response flattens out at higher levels.

At low monitoring levels you will hear the mids clearly but you will miss the high and low-end. That’s why we often see a smile curve on EQ’s and if you listen to a bedroom produced track they almost always have too much low-end and are slightly too bright. All that excessive low- and high-end mask the mid area and when you get rid of that excessive high and low-end you have a mid sharp as a knife. Fletchy-Muncher exaggerate our frequency response and make us aware of the mids even in a badly balanced mix.

The plug-in is available to download for Windows (VST).