Nomad Factory has announced the release of Echoes, an analog echo box effect plug-in designed to give you the warmth and richness of classic vintage delay effects. 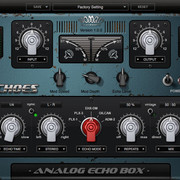 ECHOES faithfully models the greatest delay effects of all time, PLX-1 Based on Echoplex® 1, PLX-3 Based on Echoplex 3, OILCAN Based on Tel-Ray® Oilcan Delay, EHX-DM Based on Electro Harmonix® Deluxe Memory Man, and ADM-2 Based on Boss® DM-2 Analog Delay.

Following the philosophy behind Nomad Factory’s hit Magnetic plug-in, ECHOES not only sounds amazing, but it is designed to be very easy to use. Unlike many other delay plug-ins that have dozens of unnecessary knobs and confusing parameters, ECHOES has captured the essence of the original effects by keeping it simple. With the turn of a few knobs, the plug-in delivers musical results and instant analog delay satisfaction!

Cableguys Easter Egg, find it and get 30% off