NUGEN Audio has announced that it has supplied licenses of its VisLM loudness metering plug-in to 41 student television stations throughout the U.K. 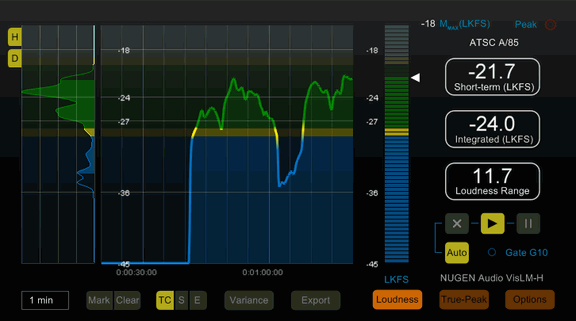 All members of the National Student Television Association (NaSTA), the student stations will use the plug-ins to help them comply with the European Broadcasting Union’s EBUR128 loudness recommendations, and also as a training tool for students to gain loudness monitoring experience in preparation for professional careers.

“People usually think of television as a visual medium, but they are more likely to notice flawed audio. Therefore, it’s critical that broadcast sound be flawless, not only to meet regulations but also to provide the best possible experience for viewers,” said Mitchell Perry, NaSTA marketing officer. “With its generous sponsorship, NUGEN Audio is giving our student members an opportunity that is simply not available in most of the U.K.’s television production courses: a chance to learn about loudness management and how to edit sound according to industry standards. After working with VisLM, students will be able to add another valuable skill to their CVs and increase their employability.”

VisLM is an intuitive, standard-compliant tool for measuring, comparing, and contrasting loudness during production, broadcast, post-production, and quality assurance, on the fly or after the fact, for entire sections of audio. With detailed, objective loudness measurement, history, and logging facilities, VisLM supports ITU, ATSC, EBU, and Game Audio standards to ensure loudness compliance for titles to be distributed virtually anywhere in the world.

NaSTA distributed the VisLM licenses to student stations throughout its network in Scotland, England, and Wales. VisLM is in use daily by on-campus television stations to create and edit programs ranging from major events and sports matches to coverage of student elections.

“For more than 40 years, NaSTA has played a lead role in supporting, promoting, and representing student television in the U.K.,” said Jon Schorah, founder and creative director, NUGEN Audio. “It is our pleasure to assist NaSTA in this effort, and it’s gratifying to know that our technology is helping these future television professionals develop the skills they need to be successful.”