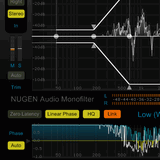 NuGen Audio has released Monofilter 4, a bass enhancement and control effect plug-in for Windows and Mac.

Used and trusted by producers the world over, MONOFILTER grabs hold of your bass and secures it solidly within your mix. Intuitive controls allow you to quickly anchor the power, whilst retaining the essential character and perceived spatial characteristics.

MONOFILTER brings back the centre of your bass, so easily lost through stereo effects processing, synth sound generation, unwanted phase inconsistencies and live recording mic. bleed. Our market leading features now give you clear control over stereo spread, transition and phase alignment, and the unique interface gives you clear and exacting visual feedback.

Monofilter is available to purchase as an effect plug-in for PC and Mac (VST/AU), priced at $119 USD. Owners of previous Monofilter version can upgrade for $59 USD.