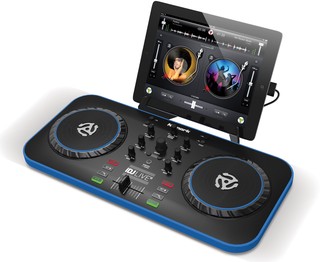 An updated and enhanced version of Numark’s iDJ Live controller, iDJ Live II features an updated low-profile design and USB connectivity, allowing it to perform with both laptopbased and mobile DJ platforms. iDJ Live II features a standard layout of DJ controls, including a crossfader, EQ knobs, and capacitive touch-activated platters. The design of iDJ Live II has also been slimmed down with redesigned platters that are now illuminated and lowprofile. A headphone/speaker splitter cable is also included.

“iDJ Live II enhances and builds upon our original vision for iDJ Live—give anyone and everyone real DJing capability in a compact, comprehensive, and fun package,” said Chris Roman, Numark Product Manager.