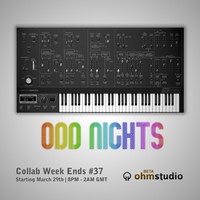 This week, everybody will use a great synth included in Ohm Studio’s default arsenal. Participants will have the choice between different projects, each of them named after one of GForce Oddity’s presets. This particular preset will serve as a basis for the musicians in the project to build a collaboratively inspired track. Of course, switching projects during and after sessions will be possible, as easily as joining and leaving a chatroom.

Newcomers are required to download and install Ohm Studio, create an account and log in between 8:00 PM and 2:00 AM (GMT). Red_Force and Jamie will be waiting for people here.