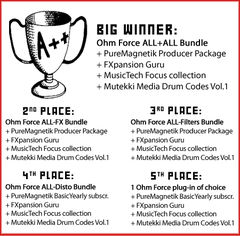 Five winners will be rewarded and big winner’s prize kit is U$1,600 value !

The cohmpetition starts April 27th 2009 and submissions must be sent until June 6th 2009. The winners will be announced a few days later.

Contest’s participants are challenged to produce a video showing how they use the Ohm Force plug-ins in their music creation/production process, focusing on real use cases, tips and tricks, etc.