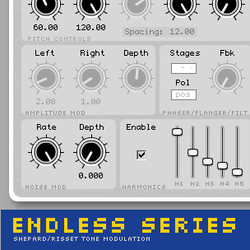 It works as a tone generator, a ring modulator, phaser, flanger or resonant filter bank.

Endless Series for Windows and Mac is available for purchase for £29.99 GBP. A standalone version for Mac only is £6.99 GBP.