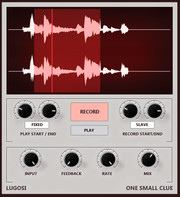 One Small Clue has announced the release of Lugosi, a FSU delay effect plug-in for Windows.

As an effect, Lugosi can be very lively and unpredictable. It reacts differently depending on the source material. Because of this it shines when used in conjunction with a MIDI controller. Hands on control allows the source material to be responded to in real-time and interesting areas can be homed in on. This lends a strong performative aspect to the effect.

Lugosi for Windows (VST) is available to purchase for the introductory price of $25 USD.