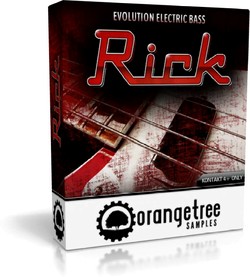 At its core, Evolution Electric Bass – Rick consists of extensive samples complemented by a powerful script. These two facets work in unison to give you ultra-realistic bass sounds with minimal effort.

Evolution Electric Bass – Rick has chromatic samples for each string, meaning that each fret was individually sampled. It has 32x round-robin and three morphing velocity layers for a smooth dynamic range. It has time-dependent release samples (15 different release times sampled) as well as time-dependent legato samples. The legato samples consist of hammer-ons and pull-off articulations sampled chromatically up to a minor 3rd upward and a minor 3rd downward as well as chromatic half-step slides. These legato samples were sampled at up to eight different transition times. We also sampled muted notes (8x round-robin), pre-roll samples (32x round-robin), muted slap samples (8x round-robin, 8 velocities), as well as slap releases (4x round-robin). The slap releases were sampled chromatically on each string, so they are specific release transitions from a sustained note.

We spent a lot of time making the interface and engine as flexible and customizable as possible, without forsaking instant playability. Essentially, we put you in complete control over how the mapping, tone, and other settings work, but have everything set to defaults that make it easy to load and start playing with minimal tweaking.

By emphasizing realism and playability, we’re confident that playing Evolution Electric Bass – Rick will give you the same excitement and inspiration as playing a real bass guitar.