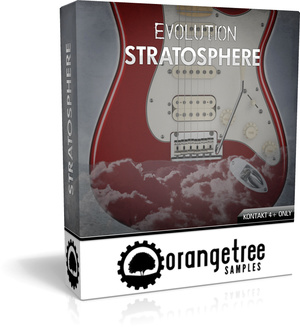 For example, Stratosphere has a new built-in strumming pattern editor. Rather than using the traditional step sequencer approach, the editor lets you create strumming patterns in a more powerful and flexible way, while still being fast and easy to use. The editor gives you control over which strings get strummed, the direction of the strum, and the speed of the strum. Plus, you can use many articulations within a single strum pattern, even incorporating special effects like string slaps as part of the pattern.

Evolution Electric Guitar – Stratosphere comes with a guitar effects engine, including a wide assortment of modeled guitar pedals, rack effects, and guitar amps/cabs. All together, it provides you with a comprehensive guitar effects suite at your fingertips without external guitar effect plugins necessary to get production-ready tones.

Finally, all the factory presets are available directly inside Stratosphere’s interface, meaning that you can see the preset name at all times as well as use convenient arrow buttons to scroll through the included collection of factory guitar tones and strumming patterns.