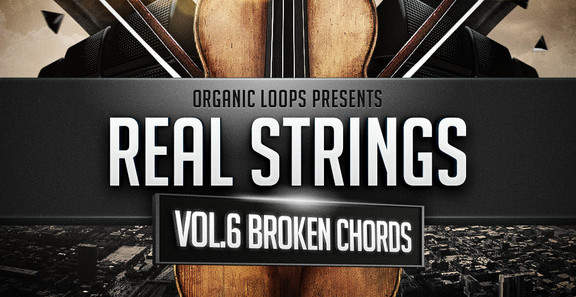 There are 94 chord patterns, recorded across 4 bars, at 100 and 120 bpm. The loops cover major, minor and open 5th chords, and unusual patterns like augmented, diminished and sus chords. The pack also includes sustained notes with rising and falling dynamics.

The pack really comes to life for producers who own Kontakt 5 as they are treated to a fully scripted performance instrument that features a customisable preset of up to 8 Broken (arpeggiated) chord patterns, a two octave spread of single notes to compliment the arpeggios and a reverb module to add air to the sounds and loops. Real Strings – Broken Chords features clever key switching allowing producers to change between the 8 loaded sequences on the fly with the ability to also change the root key of each loop. Tempo changes are not a problem as the instrument will use Kontakt 5’s ability to follow your DAWs tempo.

The sample library is available for purchase for £29.95 GBP.