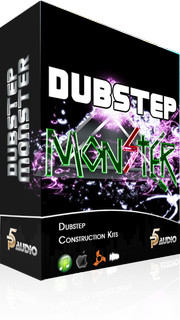 Dubstep Monster Construction Kits features 6 enormous kits filled with custom crafted loops, one shots and Native Instruments Massive® patches, all preformatted and ready to be dropped into your favorite sampler or DAW. Whether you are producing tracks for an album, or gathering sounds to spin at your nextclub gig, this product delivers hard hitting Dubstep sounds, guaranteed to elevate you above your competition.

Dubstep Monster is available to purchase for $27.99 USD.