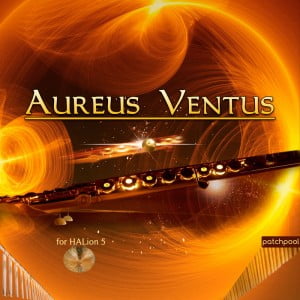 Patchpool has announced the release of Aureus Ventus, a sound library for Steinberg HALion 5.

The flute sounds for this library were created by using a special playing technique named Pars-Pro-Toto, invented by german flutist Andreas Mazur who also performed the samples used in Aureus Ventus. He found a method to create beautiful and expressive flute sounds by playing on the single parts of a conventional flute using special fingerings and embouchure techniques. This yields sounds somewhere in between a shakuhachi, an okarina, a viola and a voice, hard to describe in words really…

Multi-sampled bass flute instruments, some vocal and string sounds and temposynced percussion loops are also be included in this library.

In addition to the above a wealth of electronic derivatives create a counterpoint to the acoustic sound worlds. Tonal soundscapes, ethereal tinkles, warm and ominous drones, minimal sequences, lush pads and other fascinating textures created with programs like Kaleidoscope, crusherX, Metasynth, GRM Tools, Serum and Zynaptiq’s Morph are layered with the acoustic sounds to create expressive instruments.

The sound library is available for purchase for 68 EUR.