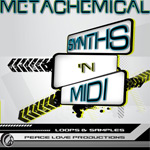 Peace Love Productions has announced the release of Synths ‘N Midi, a sample pack by Metachemical.

Synths N Midi provides you with 125 synth loops and their corresponding midi files. Use the audio loops for that signature Metachemical sound or dial up your favorite synth patch and drop the midi file in to create your own riffs. Good for producing Electro House, Breakbeat, Dubstep, DnB, Progressive, Trance, and more.

Mike Stannard (Metachemical) is known for both his sample packs and his chart topping Breakbeat songs on Beatport.

Metachemical Synths ‘N Midi is available to purchase as a download for $24.95 USD.