Internationally acclaimed composer/producer Phil Greiss recently mixed ‘Mi Gente’ — a song that has rocketed to the top of the charts in 20 countries and already has garnered more than 270 million views in four weeks on YouTube.

The infectious, Latin-tinged pop song, which is also ranked #1 on Spotify Global, is the result of a collaboration among French DJ Willy William & J Balvin, and was mixed by Greiss entirely through the new RME ADI-2 Pro converter. 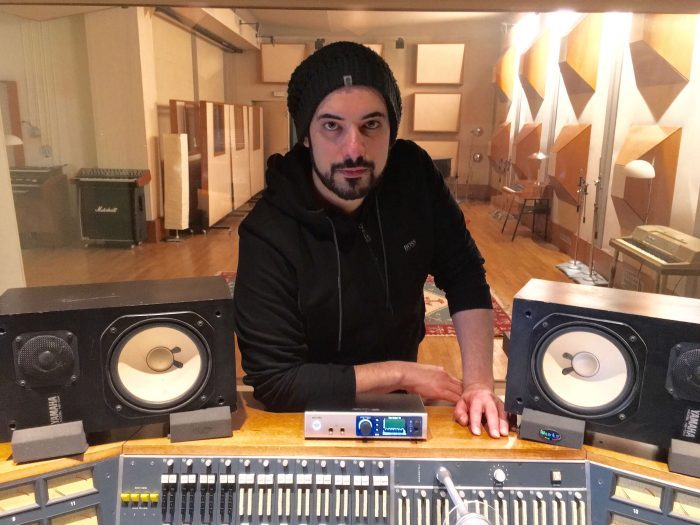 As a jet-setting songwriter/producer/mixer, Phil Greiss has been working entirely ‘in the box’ for the last three years. In addition to working remotely in Paris, Los Angeles and now Stockholm, he maintains a professional hardware-based studio in Montreal but says that he depends on his remote rig — centered on the new RME ADI-2 Pro — more than ever: “Songwriting is such a collaborative process that you need to be able to work with people in person, wherever they are,” Greiss says. “Therefore, I really need a high-quality converter wherever I go and in this regard, the ADI-2 Pro has truly been a game changer.”

Talk About Pop Music
Greiss is drawn to the pop music genre, and has left his mark on many international hits such as “Mi Gente”, and Maitre Gims’s “Sapés comme jamais” wich was crowned “song of the year” at the french “Victoires de la musique”, and “Loin (Pilule Violette)” — the latter of which has since been certified Gold in Germany while reaching #1 on the pop charts in Belgium. “I love the sound of a new pop record and always pay close attention to the sound of the top 40,” he explains. “I guess I am infusing some of these qualities and sensibilities into the work that I do for myself and others.”

While his ‘permanent’ studio in Montreal features 32 outputs going through an analog summing system paired with a high-end Focal monitoring section, his remote rig consists solely of the RME ADI-2 Pro interface, an RME Babyface Pro which he uses to track vocals when on the road, a pair of Focal Solo6 monitors, two pairs of reference headphones and an ADK laptop loaded with Pro Tools, Sonar and Ableton Live. No matter where he is working, he depends on RME’s no-compromise conversion quality and clocking. “The ADI-2 Pro helps me get the best sound out of any session, and it is great to have laser-accurate, reference quality audio wherever I am working in the world.”

Country-Hopping with the RME ADI-2 Pro
The portability — and moreover the no-compromise audio of the RME ADI-2 Pro — has enabled Greiss to move closer to the market where he is most active in Europe. “I was drawn to Europe as a result of all the records I have been working on. Willy William and I have known each other forever and always wanted to work more together and we finally used this project to this a reality,” he says. “I ended up mixing ‘Mi Gente’ and never could have anticipated its global appeal and international success.”

Greiss says that his ADI-2 Pro is the ultimate tool to toggle between songwriting, producing and mixing. “Having a tool like the ADI-2 Pro is very important because songwriting is such a collaborative process. You need to be able to work whether people are coming to you or if you are going to them,” Greiss explains. “I really need a high-quality converter wherever I go, and the ADI-2 Pro helps me get the best possible audio out of any session.”

This not only provides stellar reference audio for Greiss, but ensures the sonic integrity is exactly where it needs to be: “It is a great comfort knowing that I will have a laser-precise rendition of the audio I am working with, no matter where I am in the world or who I am working with.”

Fixing Acoustic Anomalies
One of Greiss’ favorite aspects of the ADI-2 Pro is its built in parametric EQ, which he routinely uses to correct acoustic anomalies that can occur while working in a variety of rooms. This powerful tool enabled him to become more comfortable while mixing and monitoring, with all the necessary controls at his fingertips.

“When I mixed ‘Mi Gente’ I was in Paris, and the room that I had set up had some acoustic challenges,” he recalls. “But with the ADI-2 Pro I was able to correct the output and correct a couple of room modes that were properties of this particular room. I spent probably 10 minutes with the tone sweep, revealing unwanted resonances, and I just adjusted them.”

Unparalleled Detail and Transparency
Greiss says that one of the attributes that has drawn him to RME is its transparent sound. “The built-in preamps on the UCX and Babyface Pro are very clean and transparent, which is exactly what I need,” he says. “It allows me to color the source after the recording if needed, with the plethora of amazing emulations and processors that exist today.”

Remote Without Compromise
“This has been my remote rig, and essentially everything is being done in the box now,” says Greiss. “I am working with great conversion from RME, and the ADI-2 Pro has really taken things to another level. With the ADI-2 Pro, I am completely at ease in the box and can work with greater speed and efficiency,” he adds. “It is a great time to be in the box, it’s going to be difficult to go back.”

Save 60% off UVI Urban Suite & Electro Suite at Plugin Boutique