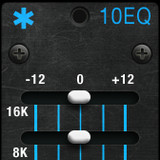 Just like its hardware counterpart, 10EQ is a very versatile tool and can be used for many mixing and mastering purposes. It features 10 bands of equalization with a special “Proportional Q” design, which automatically narrows or widens the filter bandwidth. The CPU usage of the plugin is very low, so it can be used in large quantities at the same time. 10EQ contains 20 presets, which provide useful starting values for further adjustments.

10EQ is available to download as a freeware VST effect plug-in for Windows PC.

Wave Alchemy announces Summer Sale with up to 15% off