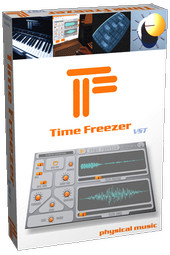 Physical Music has released version 2.6 of TimeFreezer, a virtual effect and instrument plug-in which allows you to “freeze” audio.

Infinite sound… Did you ever want to stop a sound just like a snapshot, so that it stays forever, without looping effects and without sounding like a synthesizer? I found a solution. Here it is: the TimeFreezer that freezes all kind of audio material and plays with it.

TimeFreezer is available to purchase for $99 USD.