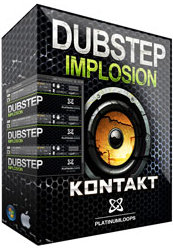 Platinum Loops has released Dubstep Implosion for Kontakt, a collection of dubstep loops and samples for Native Instruments Kontakt.

This version of Dubstep Implosion is for users of the popular software sampler Kontakt. Compatible with all full versions of Kontakt, we’ve included over 50 drag and drop Kontakt instruments as well as every sample in WAV format.

Dubstep Implosion is the ultimate toolbox for the Dubstep producer in a hurry. We’ve put together 10 song construction kits that contain 75 loops and 300 samples which give you full remix control.

Dubstep Implosion for Kontakt is available as an instant download for $59.95 USD.