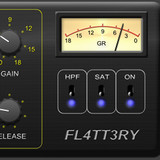 This is a gentle squashy compressor intended for use on busses, though it also works well on channels. It has a very soft knee, with a ratio that gradually increases to hard limiting, and an RMS based level detector with a window size that depends on the attack time.

This unit is inspired by a particular bit of hardware that I know quite well. Its not “modelled” however: I came up with the algorithm first, and thought it sounded similar, so then skinned the plug to resemble the hardware. It is definitely not a proper model however, so I’m not going to name the unit in question.

FL4TT3RY is available to download as a freeware VST effect plug-in for Windows PC.