Plugin Alliance has announced version 1.1 of bx_rockrack PRO, the guitar amp plug-in for Windows and Mac.

BX give you just a few (perfectly) modeled tube-amps, and the way they have captured COMPLETE recording chains in some of the best equipped studios with the help of very experienced engineers is simply revolutionary. Select your favorite speaker / recording chain, choose your amp, tweak the gain and EQ settings, and there you go.

World-class guitar sounds, recallable and reliable. If you have ever tried to record the same identical amp in the same studio twice and ended up frustrated because the results just were NOT the same in the end you know what we are talking about. 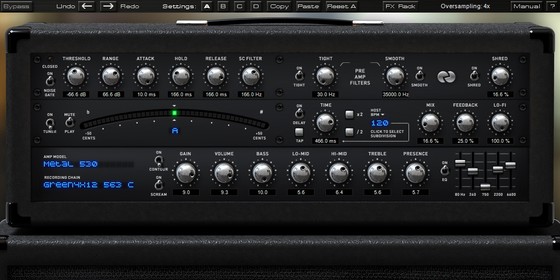 Brainworx has also announced that the standard version of bx_rockrack is now upgrade to PRO. All existing users get the PRO version free of charge.

bx_rockrack is available to purchase for $249 USD.

GRM Tools Bundles 50% off at DontCrack