The Plugin Alliance has announced the release of bx_saturator, a multi-band M/S saturation and distortion effect plug-in by Brainworx. 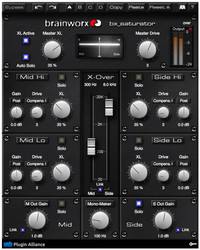 The bx_saturator is an M/S & multi-band saturation tool which can be used for mastering, mixing and sound-design.

It offers a warm and subtle distortion which works wonders on individual signals and can even be applied to the stereo master channe in the M/S stereo model. Brainworx´ NEW “True-Split” crossover technology ensures that Mid and Side channels are perfectly in phase.

The bx_saturator belongs to the new „Brainworx Rock´n´Roll line“ of creative plugins. Technical excellence for the creative musician and engineer.

Although we offer a mono / multi-mono version of the plugin we consider the stereo M/S plugin the main version which will enable you to thicken and boost any stereo signal or mix in a more discrete way than ever.

The bx_saturator for Windows and Mac (VST/AU/RTAS/AAX) is available to purchase for the introductory price of $179 USD (regular $229 USD).