Plugin Boutique has launched a limited time sale on Singularity and Molecule, offering a 40% discount on the AudioUnit plug-ins by Sinevibes. 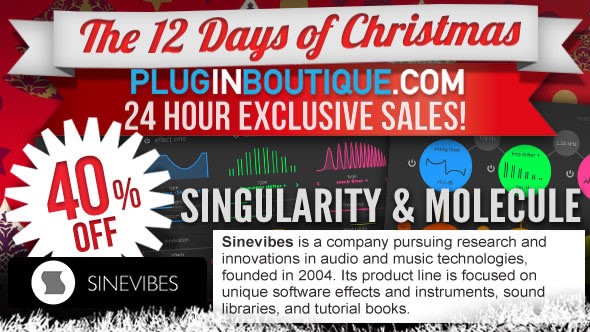 Singularity is a delay effect unlike any other. It starts with a tempo-synchronised feedback delay line capable of true stereo panning, and its tail is then sent into three extremely capable effect units connected in series. Each of these processors includes a rich selection of different algorithms: from filters, phasers and choruses to digital- and analog-style distortion, frequency shifter and granulator. In addition to all this, Singularity has four modulation generators for parameter animation – all of which lets you create extremely sophisticated, out-of-this-world delay and echo effects.

Molecule is a multi-band processor that allows you to split the sound into three frequency bands – low, mid, high – and pass them independently through different effects. It includes a vast array of algorithms such as comb filter, chorus ensemble, frequency shifter as well as barber-pole phaser, circuit-bent filter, digital- and analog-style distortion. Each of the three bands also gets its own tempo-synchronised modulator with multiple waveforms and realtime randomisation. Moreover, Molecule lets you store up to eight complete snapshots of itself and switch between them in realtime or via host automation.