Plugin Boutique has announced a Flash Weekend Sale on Rapture, offering 75% off the synthesizer instrument from Cakewalk. 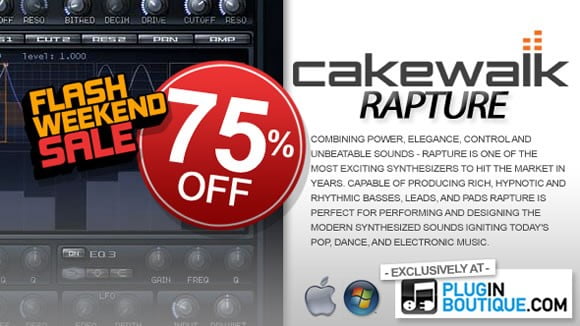 Combining power, elegance, control and unbeatable sounds – Rapture is one of the most exciting synthesizers to hit the market in years. Capable of producing rich, hypnotic and rhythmic basses, leads, and pads Rapture is perfect for performing and designing the modern synthesized sounds igniting today’s pop, dance, and electronic music.

Rapture’s non-aliasing resampling engine sets a new standard for sound quality and produces pristine high-resolution sampling and playback. Its advanced modulation capabilities include over 40 Step Generators per patch, providing an intuitive interface for generating rhythmic sequences. The beautifully designed interface and extensive sound manipulation capabilities in Rapture make it the ultimate tool to ignite your tracks.

Rapture is available from Plugin Boutique at a 75% discount until April 7th, 2015.