Plugin Boutique has launched an exclusive sale on the Eighty Eight Ensemble 2 by Sonivox, a virtual Steinway grand piano instrument for Windows and Mac. 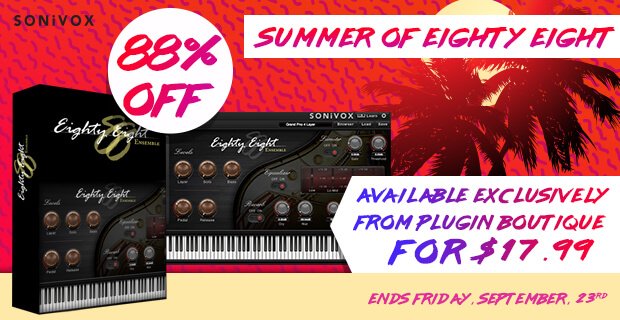 Our flagship piano instrument is not just any piano. Eighty Eight Ensemble 2 is an exceptional recreation of the Steinway 9-foot CD 327 grand piano.

Meticulously sampled and expertly voiced, Eighty Eight Ensemble 2 provides every composer, pianist, and musician the opportunity to infuse their compositions, recordings, and performances with the breathtaking realism of this truly world-class grand piano.

The recording philosophy employed in creating Eighty Eight Ensemble 2 was based on using a simple signal chain, the finest A/D converters, and exceptional microphone preamps. The result is some 1500 sample recordings, with 16 dynamic levels captured and preserved for every key.