Artists & Engineers has launched a Kickstarter campaign for Polytik, a collection of hand-held, battery powered synth modules that explore the border between play and sound. 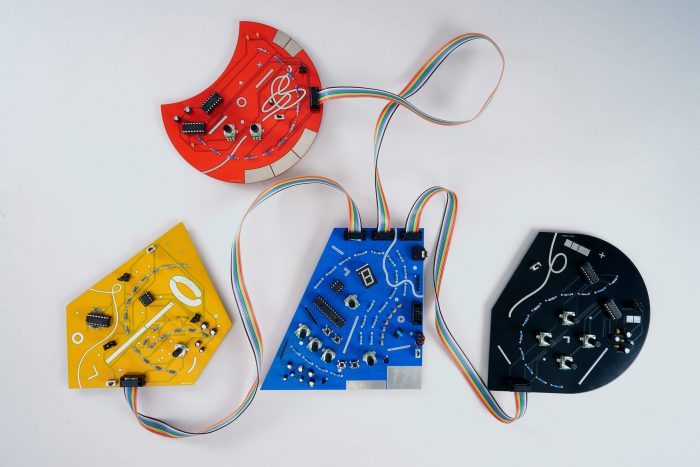 The brainchild of John Richards and Jack Featherstone in collaboration with Artists & Engineers, POLYTIK is born out of a DIY ethos and the maker community. It uses open-source hardware and encourages users to make new modules and hacks, but POLYTIK has been crafted into something very different – a series of beautifully designed objects in their own right.

These hybrid analogue/digital devices can produce a palette of sounds ranging from angular rhythmic sequences to abstract noise, pads and drones.

The Core module is loaded with 30 pre-programmed sequences from John Richards and Jack Featherstone. This module plus any one of the others is required to start making music. Further modules can be added later to expand the experience.

Each further module is part of a customisable environment that combines noise generation and alternative approaches to electronic sound synthesis. These hybrid analogue/digital devices can produce a palette of sounds ranging from angular rhythmic sequences to abstract noise.

The Golden Chip special-edition pack comes with an additional 20 sequences programmed by John Richards (Dirty Electronics) and a further 10 sequences with interviews and comments embedded in the code by some of our favourite, pioneering electronic musicians and artists including: Jas Shaw (Simian Mobile Disco), Mark Fell, Frieder Nake and Nik Colk Void & Gabe Gurnsey (Factory Floor).

The modules are objects of beauty in themselves, and POLYTIK’s design is artfully informed by the physical qualities of the circuitry. Normally hidden away in a plastic case, here the lacquer, copper traces and tin coatings are celebrated.

The design is more than purely aesthetic, though, as the key to the POLYTIK experience is the ability to work directly with the components, rather than through the once-removed medium of swiping a screen. Touching parts of the circuit boards and the visual design details enable the user to physically interact with POLYTIK to produce different sounds and sequences. Deliberately designed without any instructive markings, the intention is to encourage the user to explore the synths’ capabilities through intuitive play.

The Kickstarter project aims to raise £20,000 GBP before March 2nd, 2017. Various Polytik packs are available to backers, starting at an early bird price of £120 GBP.

Save 30% off sonible smart:EQ+ equalizer at Plugin Boutique