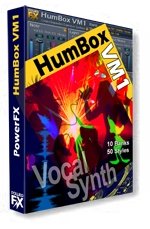 It sounds unique as a melodic line, scat or backing vocal simulation as well as an effect for a Movie & Game soundtrack. VM1 is very sensitive to what you’re playing. Press a few MIDI keys and you’ll feel it! Listen to demo examples and have a blast using the HumBox!

HumBox VM1 is available as a VST instrument for Windows PC for $49 USD.

Visit PowerFX for more information and a demo mp3.