For a regional sound company like Anderson Audio, versatility and reliability are key. 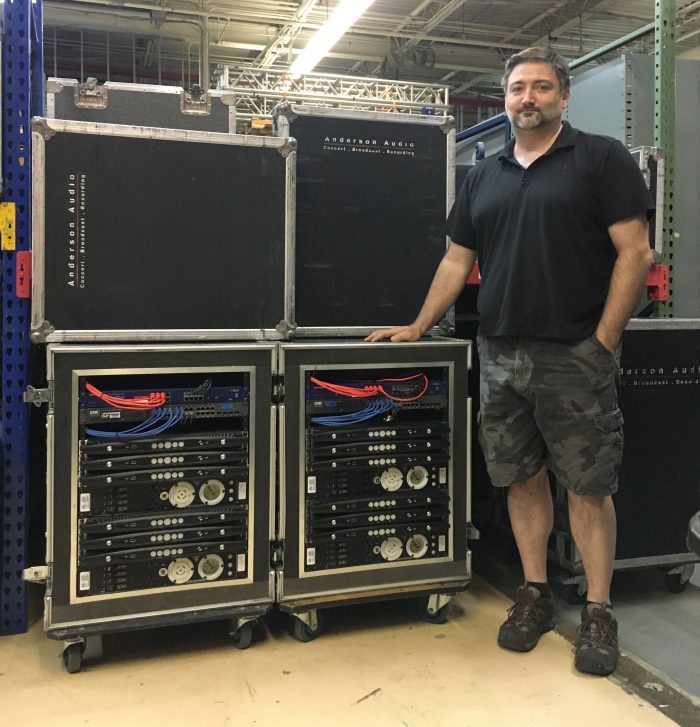 “We handle a wide variety of events, everything from concerts to corporate audio production to live sound for televised events,” says president Chris Anderson.

As the scope and complexity of the projects Anderson team work on continues to grow, the decision was made to modernize their inventory of power amplifiers to take advantage of the latest in Dante networking technology, output, and efficiency.

Anderson and his team looked to industry-leading power amplifier manufacturer Powersoft and their cutting-edge X4 amps to deliver unprecedented performance and versatility in any application.

Enter the Matrix
The decision to move to a Dante-enabled power amp was motivated in part by the acquisition of new speakers boasting the technology. “Our core system consists of EAW KF730, KF740, and SB2001 subwoofers,” Anderson explains. “But we recently expanded our PA system with some of the new EAW Adaptive speakers, so in order to keep our traditional inventory up to snuff in terms of the Dante capabilities of the new speakers, we knew we needed to upgrade the amplifiers we were using.” Anderson had first experienced Powersoft at the Pro Light and Sound convention in Germany, where had a chance to meet some of the Powersoft team and discuss the X Series amplifiers. “Their depth of knowledge was incredible, and it was clear that the technology was second to none,” Anderson recalls. “They were clearly committed to making sure their amplifiers could integrate seamlessly into a modern networked audio system.”

Digital Prowess
While Powersoft’s Dante integration was a key selling point for Anderson, it was not the only feature that made Powersoft’s X series the optimal choice. “One thing that really stood out from those conversations was the 5-stage limiting,” Anderson says. “With 3 input stage limiters and 2 output stage limiters, we’re able to push the amplifiers as hard as we want without fear of overloading the system.” In addition to limiting, the multifaceted Armonía software suite offers even more functionality for Anderson. “The powerful processing within the Armonía software also allows us to load in the latest presets available from our speaker manufacturers for optimal sound performance.”

Diminutive Dominance
Anderson decided to acquire 18 Powersoft X4 amplifiers for their inventory, replacing their existing stock of amplifiers. “We wanted to go to a one-amp inventory to maximize interoperability,” Anderson says. “Because of the high power output of the X4, we know it can handle any workload we give it and configure it however we want. Now we don’t need separate subwoofers racks, separate racks for the different tops, or utility racks, we just have our X racks.” And those racks are lot more compact than anything the company has used in the past. “We went from 40 amps down to 18 when we transitioned to Powersoft,” Anderson says. “We can be doing a big outdoor show now and we’ve got 3 10-space racks stacked on top of each other running 24 EAW 740s and 18 to 24 EAW SB2001 subwoofers. You look at that little column of amps and it seems impossible that it could running this whole system.”

Not only are the X4 amplifiers running a system that large, they are able to handle the task with ample headroom. “There has been a noticeable improvement in headroom, clarity and low-end performance,” Anderson says. “We’ve probably done 30 bands on this rig already and everybody has been very happy with the sound.” Anderson knows they haven’t even tapped into the full output potential of the X4 amps yet, and is pleased that they provide the potential to handle much larger events. “We run the Powersoft amps on 3-phase power and we’re not tripping breakers or seeing warm cables or anything commonly associated with high-output amplifiers,” Anderson says. He also thinks Powersoft’s state-of-the-art power supply, featuring Power Factor Correction, is reducing the strain on his generators at outdoor events. “The self-regulating power supply seems to be improving generator performance—we’re not seeing smoke coming off the generators every time the subs hit and the output is very consistent.”

Built to Grow
Anderson and his team are still perfecting all the powerful possibilities available with the powerful Dante integration included with the X4, but because of the incredible end-to-end engineering of Powersoft amplifiers, the rewards are already impacting everything they do. “While it was the networking piece that got us interested in the X series in the first place, there is so much more to the X4,” Anderson says. “The variety of input choices is great, the software is really powerful, and the thing seems to be able to generate massive power out of nothing. The X4 is going to be the heart of our system for a long time to come.”