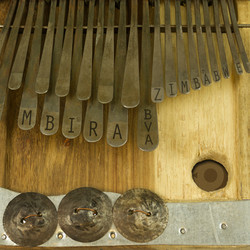 The MBira bva Zimbabwe is a twenty-two key MBira with added machachara—or “sizzler” to give a buzzing sound. The buzzing is traditionally important because it is believed to attract the ancestral spirits.

Precisionsound has deconstructed the sizzler from the original tone, so that the user can mix between the chromatic tone, the release noises, and the sizzler sound, all within the Kontakt interface. The user can also adjust the sizzler’s decay independently, to find a balance between the tone of the MBira keys and the buzz of the sizzler.

The MBira bva Zimbabwe library was sampled in two velocity layers, and recorded four round robins for each of the chromatic metal keys, sizzlers, and release samples. The instrument was close-miked in stereo, and the library contains 252 24-bit WAV samples. The key range of the instrument is from B1 to C5.

The library is available to purchase for $20 USD. Kontakt programs require the full version of Kontakt (not compatible with the free Kontakt Player).