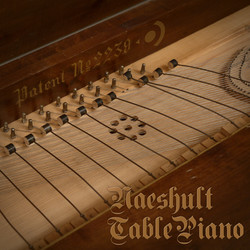 Precisionsound has released the Naeshult Table Piano, a virtual instrument sample library for Kontakt and EXS24.

These so-called table pianos, or piano harps, were made in Småland in the south of Sweden from about 1880 until 1929, when the manufacturing plant was burnt. During this period there was a use for self-playing instruments in schools, churches, and other groups. You could call them “sing-along machines of the 1800s”. Naturally, the demand declined in conjunction with the introduction of gramophone records.

Now, a hundred years later, Precisionsound have taken this limited but charming contraption and made it a flexible and playable instrument for software samplers. Their aim was to honour the instrument’s original characteristics – the clapping of the clubs, the sonorous sound of the strings coming out of the box.