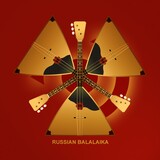 Precisionsound has announced the release of Russian Balalaika, a very detailed sampled Balalaika for NI Kontakt, EXS24, HALion and SoundFont.

The recording was made in the “Usachevsky” studio at the University of Utah, and the instrument was played by Igor Iachimciuc and edited by Lars Westin, KSP script programming was made by Iain Morland.

Russian Balalaika is available to purchase as a download for $69 USD (+$11 USD on DVD); all formats are included.