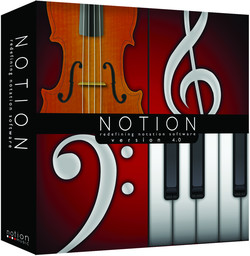 PreSonus has announced it has acquired the assets of Notion Music, a leading developer of music-notation software located in Greensboro, North Carolina.

“We will, of course, continue to develop and sell all of Notion Music’s current products,” observes PreSonus CEO Jim Mack. “Notion is a strategic part of our increasedcommitment to the education market. And, at the same time, there are powerful naturalsynergies between Notion and our Studio One® DAW, so it’s reasonable to expect that all PreSonus customers will see additional benefits from this acquisition in the future.”

Education Market Manager John Mylnczak notes, “Music educators, students, and composers rely heavily on notation software, and Notion is much easier to use than most such programs. Furthermore, iPads and other mobile products are increasingly favored by students and teachers. So our ability to include Notion products for Mac, Windows, and iOS in our educational packages will be of great value to music teachers and students.”

Adds PreSonus Executive VP of Product Management John Bastianelli, “We already have demonstrated our iOS expertise with QMix-AI, SL Remote-AI, and SL Room Control. With Notion 4 and Progression for iPad, we’re clearly doubling down on our investment in mobile computing. We’ve also emphasized integrated solutions with all of our software, so it makes sense that we would incorporate Notion and Progression into new solutions for composers and educators.”