PreSonus has announced a major update to its award-winning recording and production software Studio One 5, adding improvements for production, performance, and especially mastering.

The first and still only DAW with an integrated mastering environment, Studio One 5.5’s Project Page is now even more powerful.

The number one user feature request for the Project Page is now available. With Studio One 5.5, the Project Page now provides full track volume, master volume and insert-effects plug-in parameter automation. Write automation in real-time, using a mouse or hardware controller, or by using the powerful Paint Tool. Clip Gain Envelopes have also been added to the Project Page, enabling you to precisely fix gain issues while mastering, without using dynamics plug-ins. Use the new Listen Bus on the Project Page to monitor through your favorite room-correction plug-ins or headphone monitoring tools without affecting the Master output. Free up processing power for complex mastering chains without losing the ability to make adjustments later using Track Transform. It’s all new in Studio One 5.5 Professional.

Studio One Professional’s powerful Digital Release publishing feature now provides the ability to export multiple formats at once so you can export your mastered session for high-resolution releases and streaming services at the same time. 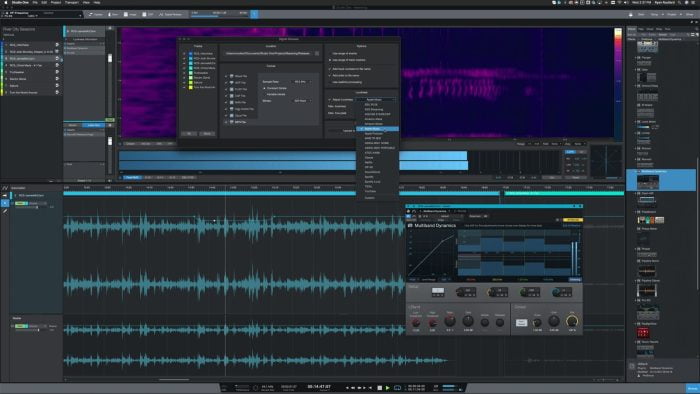 The new Target Loudness options let you set target values for loudness and true peak during export — or choose from presets for every popular streaming service to take the guesswork out of preparing your latest release. A new, proprietary, custom-designed dithering algorithm minimizes conversion artifacts and preserves low-level signals when preparing your high-resolution audio for streaming.

Studio One 5.5 also introduces production and performance features. Any MIDI file can now be dragged directly to the Chord Track to extract its chords — and only Studio One’s chord detection works with Audio Events and Instrument Parts. You can now create a strum pattern manually by dragging note events in a selected chord while holding modifier keys. PreSonus’ Ampire XT guitar amp/cabinet/pedalboard plugin, available in Studio One 5.5, adds faster preset switching optimized for the Show Page, so you can trigger Ampire presets from a MIDI pedalboard during a live performance without missing a beat.

Other improvements include saving automation with mix scenes, so you can experiment with multiple automation passes without losing work. The powerful Plug-in Nap feature introduced in version 5.4 is now available on a per plug-in basis, providing even more optimization control. Improvements have also been added for PreSonus ATOM-series controllers with Impact XT and SampleOne XT.

Studio One 5.5 is available for purchase from the PreSonus store and at distributor Plugin Boutique for $399.95 USD (Professional) / $99.95 USD (Artist).

The update is free for registered Studio One 5 users and is included in PreSonus Sphere membership.

Save 50% on Arca dark & ancient string textures by MNTRA Instruments