PreSonus has announced that its Integrated Smaart frequency analysis, new equalization and talkback features, and even more extensive iPad control are included in PreSonus’ free Universal Control 1.6 and StudioLive Remote 1.3 for iPad® updates. 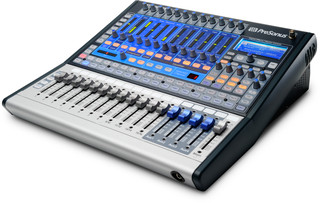 “All current owners of our StudioLive 24.4.2, 16.4.2 and 16.02 can immediately use these enhancements,” noted PreSonus Executive Vice President of Product Development John Bastianelli. “It’s further proof of our commitment to providing complete problem-solving systems, not just hunks of hardware.”

The Smaart Spectra spectrograph display can help to precisely identify nasty feedback frequencies, enabling even less-experienced users to easily tune P.A. speakers to the room. Smaart Spectra graphs a continuous series of spectrum measurements, showing frequency on one axis, time on another, and amplitude indicated by colors. This makes it very useful for quickly identifying feedback frequencies, which can be easily addressed using StudioLive graphic EQs.

Finally, Universal Control 1.6 updates the Windows and Mac drivers for all and StudioLive-series mixers products and for all FireStudio-series interfaces except for the original FireStudio (26×26). This update greatly improves performance, especially on Windows systems. Note that Universal Control 1.6 requires a firmware update to StudioLive mixers.

PreSonus has simultaneously released StudioLive Remote 1.3 for iPad. This version of the company’s wireless mixer-control app adds Talkback on/off and routing assignments and enables Scene recall for hard-disk-based Scenes (but not for Scenes held in mixer memory).

Universal Control 1.6 is a free update and can be downloaded from the Technical Support section of the PreSonus Web site. StudioLive Remote 1.3 is a free download from the Apple App Store.