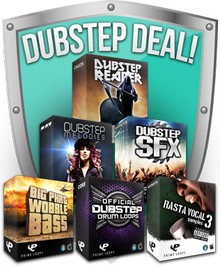 Prime Loops has announced the release of Dubstep Producer, a bundle of 6 sample packs for dubstep music production.

Rip through the niceties with some of the phattest, meanest, dirtiest Dubstep available! Our latest collection of massive, roaring sound is the huge “Dubstep Producer” Bundle Deal.

Mixing together no less than 6 epic Dubstep sample packs from amidst our bulging catalogue, you’ll find sonic inspiration in the form of old skool Dub, UK Bass, contemporary US Dubstep and everything in between!

At an indulgent 2.14GB+, this combo deal really is value for money. If you’re looking for an entire arsenal of aggressive Dubstep inspiration, then you know what to do!