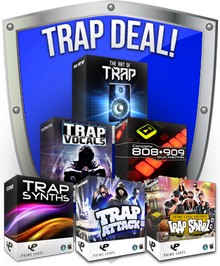 Prime Loops has announced the release of Trap Producer, a bundle of 6 sample packs for trap music production.

Caught the Trap bug yet? We’ve got the right medicine for you… Coming straight from the Prime Loops lab we prescribe our latest Bundle Deal Trap Producer! This aggressive blend of Southern Hip Hop, Crunk and Dutch House has quickly taken over the map and made its mark on both mainstream & underground music.

Mixing together no less than 6 of our baddest Trap sample packs, you’ll find all the ammunition you need in the form of earth quakin’ 808 kicks & basslines, dramatic chords & synth riffs, signature Trap vocals and much more!

At an indulgent 2.4GB+, this combo deal really is value for money. If you’re looking for an entire arsenal of Trap ammunition, then you know what to do!

Get rewarded for your purchases at Minimal System