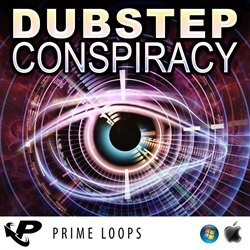 We’ve infiltrated Dubstep’s inner circle to bring you ‘Dubstep Conspiracy’, hi-jacking and fusing sounds from the Trap and Drumstep worlds to give you musical weapons to fight in every corner. The bass, drum, synth and SFX loops included in this pack are finally ready to see the light of day, so throw them into only the most sinister Dubstep productions for addictive effect. Plot your audio heist now and grab this pack quickly before it disappears back underground!

Follow the deceptive wobbles to uncover over 470MB of fresh sounds, with over 200 audio files arranged into 6 folders of Basslines, Drum Loops, Synth Leads, Mixed One-Shots, Instrumental Loops and SFX Loops. Delve deep into the murk that is ‘Dubstep Conspiracy’ and you’ll find a host of cocky, daredevil basslines designed to drive any mix to new levels of intensity, maniacal percussive impacts programmed at that foot-stomping half-speed swagger and a wide array of synths from the sordid to the sombre.