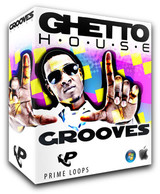 A new breed of House Music is emerging into the spotlight from London’s pioneering music scene: A wide selection of current genres such as Dubstep, Electro, Garage, Grime, Urban and UK Funky have united in a new mind-blowing style, and here’s your first taste, fresh in-tune with the dance movement… Ghetto House Grooves

Authored by one of Prime Loops’ best resident engineers (the mastermind behind our top-selling Tech House collections, plus ‘Kings of Swing’ & ‘Fidget Vs Electro’ sample pack releases) Ghetto House Grooves is set to become the next big thing this year! Scott Harvey has lots of experience in the Urban House Scene under his belt, releasing on major labels such as Warner, EMI, and Ministry of Sound. Whether he’s in London or Berlin, Ibiza or New York, Scott’s influence is well respected all around the world.

Ghetto House Grooves is available to purchase for £16.95 GBP.