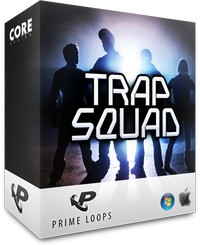 Prime Loops are enlisting for the ultimate sound riot! Do you have what it takes to handle the high calibre audio ammunition stashed inside this Trap Squad? Sonically engineered to calibrate with any rebel sound system, this Trap sound library delivers a dangerous helping of digital disorder!

An aggressive blend of Southern Hip-Hop, Crunk and Dutch House, Trap is a wild child that cannot be contained by the underground! Rising up into the mainstream, there’s a massive demand for fresh Trap sounds and Trap Squad has been assembled especially to drop an epic amount of next-level stimulation into the scene!