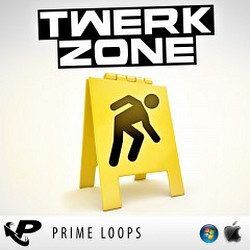 Prime Loops has launched Twerk Zone, a collection of 160+ of twerk music loops and samples.

If you’re unfamiliar with the dance phenomenon that is Twerking then firstly, where the hell have you been for the few months!? If you really don’t know, ask Miley Cyrus – she recently attempted to assert herself as the ambassador of Twerk at the 2013 VMA’s but this voluptuous action’s true origins lie in traditional African dances. The dance itself has spawned a whole new sub genre of bass heavy hip hop, stuttering out speakers the world over at a booty-shakin’ 100 Bpm – the perfect tempo to wobble your thang to!

Twerk Zone will blast a fresh batch of bounce into your productions in the same vein as recent chart smashers and dance floor mashers Baauer, Waka Flocka Flame, 2 Chainz and more! Build your very own Twerk anthems from this 290MB+ collection of loops and one-shots, delivering well over 160 jumping loops and samples sorted into 6 folders of Basslines, Bass One-Shots, Drum Loops, Drum-One Shots, SFX Loops and Synth Loops.