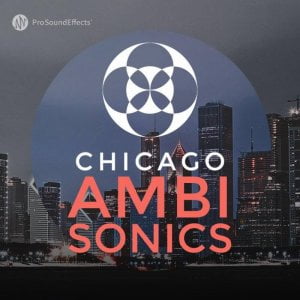 Featuring over 3 hours of immersive urban ambiences, Chicago Ambisonics includes software that allows sound editors and mixers to point “virtual microphones” in any direction with a variety of polar patterns for greater control and creativity. This is the second Ambisonics library PSE has released following last year’s acclaimed NYC Ambisonics which, when previewed at NAB 2015, the press dubbed “the future of sound effects libraries.”

“Chicago Ambisonics offers unparalleled flexibility and realism when mixing backgrounds for a project,” says David Forshee, Pro Sound Effects Library Specialist. “The B-format files give users the ability to tweak perspective of the city ambiences with software in real time to specifically match the setting of a scene.”

Sounds of Chicago are in high demand due to more productions filming in Chicago than ever before such as Chicago Fire, Chicago PD, Chicago Med, Chicago Justice, Empire, The Exorcist, The Patriot & more. Produced and recorded in 24-bit/96kHz high-resolution by Pro Sound Effects, the Chicago Ambisonics sound effects library was captured throughout Chicago including recordings from Magnificent Mile, Chinatown, the L Train, West Loop, Kennedy Expressway, O’Hare International Airport, Lake View, & Wrigley Field.

The Ambisonics format allows for versatile use of the library, as the recordings can be decoded to mono, stereo, 5.1, 7.1 and beyond. And with leading companies in new immersive media technology recently selecting Ambisonics as the standard spatial audio format, Chicago Ambisonics is perfect for VR audio and 360 video applications as well.

Chicago Ambisonics is available for purchase for the introductory price of $49 USD for a lifetime license until August 31st, 2016 (regular $79 USD).