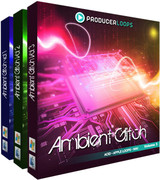 The Ambient Glitch series introduced producers to some of the darkest, most cutting edge atmospheric sounds yet heard in a sample pack across 3 stunning volumes. Now, with this bundle you can own it all: 3.0 GB of highly original and inspiring glitch content created by expert sound designer and soundtrack producer, Jeff Rhodes.